"Those who do not remember the past are condemned to relive it."

Text and Web-site by James Bowen

AUSTRALIA FACES THE THREAT OF A JAPANESE INVASION

About thirty minutes before Japan's infamous surprise attack on Pearl Harbor, and in pursuance of its overall plan to seize British Malaya, British Borneo, the Philippines, and the resource-rich Dutch East Indies (now Indonesia), a Japanese invasion force landed at Kota Bharu in northern Malaya in the early hours of 8 December 1941 (Singapore time). On 10 December 1941, the Japanese achieved naval superiority in the Indian and western Pacific Oceans by sinking the British battleship Prince of Wales and the battle cruiser Repulse. Without naval support, and despite courageous resistance, poorly equipped British, Australian and Indian troops were unable to halt the advance of Japanese troops down the Malayan peninsula towards the Singapore naval base that Australia had been repeatedly assured was "impregnable". Singapore fell to the Japanese on 15 February 1942. On the following day, Prime Minister John Curtin told Australians that the Battle for Australia was about to begin. 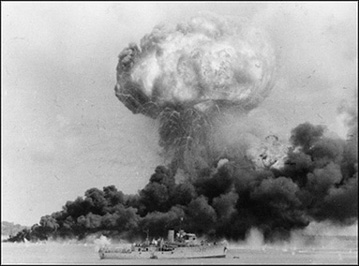 Australia faces the Threat of a Japanese Invasion

Siam (now Thailand) surrendered to the Japanese on 9 December 1941, and the Japanese were able to launch an invasion of Burma through Siam. The Japanese invaded British Borneo on 15 December 1941 to gain access to rich oil supplies. The Japanese began their invasion of the Dutch East Indies at Tarakan in Borneo on 10 January 1942. On 23 January 1942, five thousand elite Japanese troops stormed ashore at Rabaul in Australia's Territory of New Guinea and overwhelmed the Australian garrison. At the end of February 1942, despite courageous resistance against overwhelming odds by British, Australian, American and Dutch forces, the advance of Japanese military forces across South-East Asia towards Australia appeared unstoppable.

Japanese attacks on the Australian mainland