About 3,500 Australian Army nurses served either overseas or in Australia during World War II. Those who served close to the battlefield experienced at first hand not only the discomforts of makeshift field hospitals, including mud, dust, bad food, and lack of normal amenities, but also the risks and horrors of war. 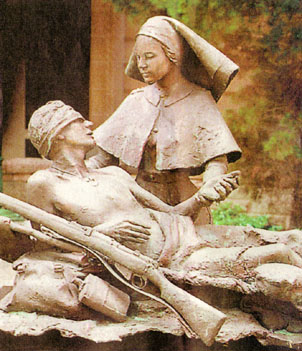 This monument to Australian Army nurses is situated in Anzac Square, Brisbane. Rejecting the distortions and other
eccentricities of many post-modernist monuments in Australia, this beautiful and sensitive traditional sculpture conveys with
poignancy the devotion of the nurse and the special bond between her and her soldier patient.

Sixty-five Australian Army nurses were evacuated from Singapore on the small ship Vyner Brooke shortly before Britain's "impregnable fortress" fell to the Japanese on 15 February 1942. Only twenty-four of those nurses survived to return to Australia in 1945. Twelve died when their ship was bombed and sunk by Japanese planes. Twenty-one survivors were slaughtered by Japanese soldiers when they reached Bangka Island in lifeboats. Eight survivors died as prisoners in Japanese hell camps.

Many returned nurses found that they could not bear to continue nursing after the horrors that they had experienced during war service. When unable to work because of war-related injuries, illness or psychological problems, they struggled against bureaucratic indifference to achieve adequate pensions to support themselves and dependents.

Despite enduring many of the risks, horrors and discomforts of overseas war service, and despite the many lives saved by their dedicated service, Australia's Army nurses only received the recognition that they deserved in 1999 with the dedication of the Australian Service Nurses' National Memorial in Canberra.

On 12 February 1942, with the fall of Singapore to the Japanese imminent, sixty-five Australian Army nurses, including Sister Vivian Bullwinkel, were evacuated from the besieged city on the small coastal steamer Vyner Brooke. 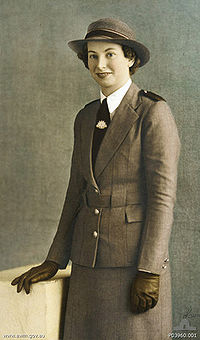 In addition to the Australian nurses, the ship was crammed with over two hundred civilian evacuees and English military personnel. As the Vyner Brooke was passing between Sumatra and Borneo, Japanese aircraft bombed and strafed the overloaded ship and it sank quickly. The survivors in lifeboats were strafed by Japanese aircraft but some reached Bangka Island off the coast of Sumatra. Twelve Australian nurses were either killed in the attack on the ship or drowned in the sea. The remaining fifty-three nurses reached Bangka island in lifeboats, on rafts, or by drifting with the tide.

Wearing their Red Cross armbands, and having protected status as non-combatants by convention of civilised nations, the nurses expected to be treated in a civilised manner by the Japanese when they reached shore. Their expectations were short lived. The lucky survivors were rounded up at gunpoint by the Japanese and herded into a building that was filthy and overcrowded. All of the survivors were tired, thirsty, and hungry. Some were suffering from exposure to the sun after many hours immersed in the sea, and some had been wounded in the attacks on the ship and the lifeboats. The Japanese were unsympathetic to their plight and only offered the survivors a bucket of water and a bucket of rice.

The unlucky survivors, including twenty-two Australian nurses, landed in lifeboats on the northern coast of Bangka Island and lit a bonfire to guide other survivors to them. Sister Vivian Bullwinkel was in this group of nurses. When the number of survivors at the bonfire reached about one hundred, it was decided that they should surrender to the Japanese. A party of male survivors went off to find Japanese. They were accompanied by civilian women and their children. The twenty-two Australian nurses stayed to look after the injured, and they made and erected a red cross to indicate to the Japanese that they were non-combatants.

A patrol of about fifteen Japanese soldiers arrived from the coastal township of Muntok. While some guarded the Australian nurses, the rest herded the male survivors, about fifty in number, down the beach and around a headland. Shortly afterwards, the Japanese soldiers returned alone. Some were wiping blood from their bayonets.

The twenty-two Australian nurses were then ordered by the Japanese to form a line and walk into the sea. The nurses knew what was going to happen to them, but none panicked or pleaded for mercy. When the water had reached the nurses' waists, the Japanese opened fire on them. Sister Bullwinkel was hit in the back by a bullet and knocked off her feet. Upon discovering that she was only wounded, she pretended to be dead. After some time, she risked a glance at the beach and saw that the Japanese soldiers had gone. She looked around for the other twenty-one nurses and saw none. She was the only nurse who survived this massacre.

When she reached the beach, she was joined by an English soldier who had survived the massacre behind the headland. Private Kingsley had been bayoneted by the Japanese and left for dead. They were given food by the local village women, but after two weeks, they realised that their position was hopeless, and they decided to walk to Muntok and give themselves up. Shortly afterwards, Private Kingsley died from the bayonet wound.

Realising that the lives of all survivors of the Vyner Brooke would be at risk if the Japanese learned of what she had seen, Sister Bullwinkel concealed her wound from the Japanese and treated it herself. She survived harsh imprisonment to give evidence of the massacre at a war crimes trial in Tokyo in 1947.

Sister Bullwinkel's recollection of the massacre, written on five sheets of paper, is held by the Australian War Memorial in Canberra.

Here is her story.

The Bangka Island Massacre is just one incident drawn from thousands of documented Japanese atrocities committed during the Pacific War 1941-45 and Japan's unprovoked and brutal war against China which began in 1937 and lasted until 1945.

The explanation for these unspeakable atrocities is unlikely to lie in the Japanese character but in the extreme militaristic and racist nature of Japanese culture prior to 1945. Those interested in understanding that culture will find a treatment of it on this web-site in the sections "Historical Foundations of Japan's Military Aggression" and "Imperial Japan's Path to World War II".

This 1997 film directed by Australian Bruce Beresford attempts to recreate the terror, cruelty, misery and deprivation experienced by women in a Japanese prison camp in Sumatra during World War II.